In April this year several females and progeny landed in Tasmania after the Gyranda Female Sale. John, June and David Pilcher along with Cheryl Tapp went on to show some of those animals and at both Launceston and Hobart shows the Gyranda blood cattle had huge success.

As fate would have it Burnett and Louise were on hand at both shows to witness the spectacle.  Burnett commented  “It is great for us seeing the progeny of females purchased at the Gyranda Female Sale winning major ribbons at both shows, and the current owners of these cattle so happy with what they purchased.” Said Burnett. “We were impressed with the care and attention being given to these cattle and the way they were presented at these shows.” 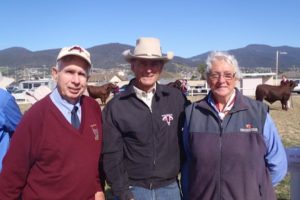 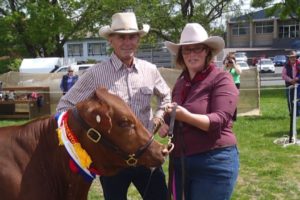 Burnett & Louise with The Pilchers, Cabe Ebden (with Senior Champion Bull bred by the Pilchers) and Cheryl Tapp – taking pride in their respective successes.

Breaking In the Show Cattle.

Speaking of shows…We have selected out a few young animals to break in for the Santa Junior Show at Warwick in January. If all goes well we will continue taking some of them through to Beef 2015 in May.

Emily Rockemer has been in charge of breaking in and as you can see her week started of a little rough…but her calm demeanor won them over in a few days.

We will be taking about eight head down to Warwick in January but there are plenty of spaces left. So if your kids – or others you know are interested in a fantastic week of learning then please contact the Santa Society as soon as possible to book them in.