Another highlight was heavy support from AuctionsPlus. The electronic networks representative and Qld/NT Coordinator, Colin Campbell accounted for 56pc of the offering. These five purchasers came from four states.

Gyranda C967 a seven-year-old with a bull calf at side by Gyranda Enigma topped proceedings at $3400. C967, a daughter of Gyranda Evolution sold through AuctionsPlus to Tasmanian breeder, Cheryl Tapp, Cheralton Park, Sorell.  Cheralton ended with five females with three calves for on average $1420. Sister Tasmanian prefix, the Neelai Stud, Bothwell, owned by John, June and David Pilcher picked up three cow/calf units for a $1367 average through Grant Daniel and Long’s, Harvey Weyman-Jones.

Top selling heifers were a pen of two for $1600 each going to Robert Hoffman, Kaloola, Theodore for two-year-old daughters of Waco Yan and Rowanlea Duntroon (PS).

Selecting a line of 34 females was Kathy Kucks, Sunshine Plains, Theodore for an average price tag of $843 topping at $1050 for a unit and $850/head for a pen of six commercial heifers.

David and Rhonda Hoffman, Kaloola, Theodore returned to take a pair of cow/calf units for an $1150 average. 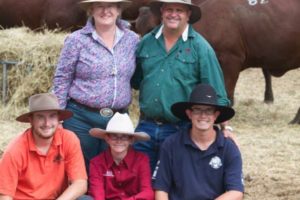 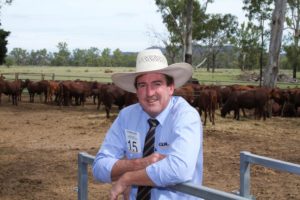 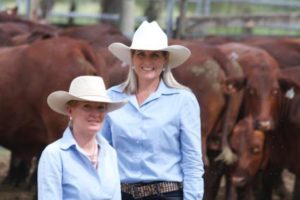 1. Jason and Sandra Clark, Greenside Stud, Wee Waa, New South Wales (back) purchased five females at last weeks Gyranda Female Production Sale, Theodore, Queensland for an average $1000 each. The couple pictured with their children Alex, Nick and Georgina (front) paid up to $1200 per head for a trio of PTIC classified heifers.

2. With his selections for client, Stephen Blore, Kiandra, Quilpie is Dalby based, Managing Director, Livestock and Property Sales, Grant Daniel and Long, Peter Daniel. Mr Daniel selected a line of 78 heifers for Mr Blore for on average $776 per head topping at $800 on a number of occasions.