Just a few months ago the family were desperately waiting for their luck to turn after a poor season saw them forced to sell off their Santa Gertrudis commercial cows from December to relieve the pressure on their 15,000 hectare property.

They had started sifting through their stud breeders and sold down to next year’s number six heifers when the heavens finally opened, dropping 203mm of rain in March.

While it was too late for their full commercial cull, they are now heading into winter in a “fantastic” position with plenty of feed and smaller numbers.

The season turnaround was almost as big a shock to Peter Mahony as was their best weight gain win in Class 38, Pen of Six Grain Fed Steers (70 day), where their number six Santa Gertrudis steers had an average daily weight gain (ADG) of 3.07 kilograms and average final weight of 646 kilograms.

Four of the winning pen of steers finished in the top 30 individual ADG placings with the highest coming in third with an ADG of 3.61 kilograms. 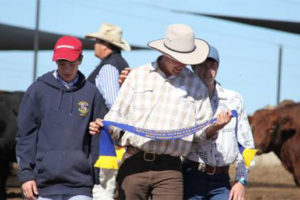 One steer finished third in the top 30 individual ADG placings with a gain of 3.53kg.

Their four pen entries were mostly cull stud bulls and it was the first time the family had taken out the 70 day class after winning the 100 day section two years ago in their first time exhibiting.

Mr Mahony said he was ecstatic about the 70 day win after he had no idea his “little fellas” would perform so well.

“Our cattle (and) our market is more your Jap Ox market, a bit more later maturing type so it’s surprised us a bit,” he said.

“Now you have got all this information and by the end of the whole competition you have got 24 bullocks but you have also got that full set of data so you can compare and it does show up some interesting things.

“When we last did it EBVs were related.”

He said temperament and constitution were critical aspects when it came to winning cattle along with fertility.

The strong season will allow the Mahony family to begin to rebuild their commercial herd of Santa, Brahman and Droughtmaster cross and they will begin shifting females down from the stud herd.