The run of poor seasons experienced across most of Northern Australia has seen a corresponding drop in the pregnancy testing results that will continue to eat into profitability for the foreseeable future. Perhaps in such times it is of value to note what tools are available to reverse that trend…even in tough seasons.

Genetics, of course, is vitally important, and disease can have serious consequences, but few would argue that it is nutrition which has the greatest effect on the year to year variation in calves on the ground. Most producers would also reply that the cost of maintaining that nutrition in tough seasons simply doesn’t pay.

We pray that nutrition is not an issue this year, but if it is, then making decisions at the critical times to best utilise the feed on hand will be of vital importance. And one of those most critical decisions is when to wean.
In a very dry summer here at Gyranda this year we increased our pregnancy rate by 5% across the board on what was already a consistently strong rate. We also tightened our calving up into a 10 week window. The single tool most responsible? Early Weaning. For two years we have weaned everything and weaned early when we saw the cows slipping below that body score 2.5 – 3.

Without needing to milk those cows were able to actually put on some weight in Autumn (especially this year with some fortuitous rain in March) and with the help of dry lick managed to come out of winter and calve in body score 3-4. A lucky shower in early spring and the cows are cycling and pregnant. Compare this to a cow that goes into winter poor, calves out in spring but can only fall pregnant after putting on weight over the wet season…which never arrives.

Early weaning has been a stock -in -trade for northern cattle producers for decades but is not as readily taken on by those in Central and Southern Queensland and Northern NSW. Perhaps it is our habit of growing out big weaners on what is normally such strong country and a fear of the unknown. What do I do with my underweight weaners? 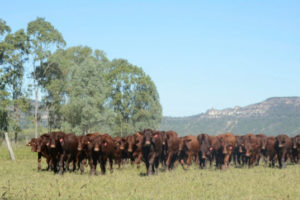 Depending on how early you have to wean you will often have to handle your weaners with a little more care. Some have weaned down to 60kg and certainly those in the 60- 130kg bracket need special attention including milk replacement. Anything between 130kg and 170kg (which is where our lightest weaners normally fall) needs extra care (i.e. grain ration ) to avoid staying weedy. In my experience animals weaned at 170 – 220 kg can survive without extra care but will always lag behind their larger colleagues. With a bit of extra help these animals can grow into highly productive units without missing a beat. There is an up front cost to feeding these weaners, but I suspect it is dwarfed by the unseen cost of lower pregnancy rates and decreased vigor in our cows.

The recent Cashcow project demonstrated unequivocally that body score condition of cows going into the winter before they are joined is a vital ingredient to better fertility rates. I suspect that most of us intrinsically know this but have been caught out by the unseasonal weather.

If it is slow to rain again then the new year is a critical time to start evaluating your cows. If they have three/four month old calves on without a break in the season then it is highly likely their body score will be slipping below that critical level.

Here at Gyranda we have weaned in late March/ early April but should have weaned earlier this year. Our cows came in 80kg lighter than normal and, were it not for the March rain, they would have been struggling to be in body score 3-4 coming out of winter. We dodged a bullet this year, but will not always be so lucky.

If we recognise that seasons do change, and that we don’t want to spend more than the bare minimum on supplementary feeding, or waste money by stocking too lightly then I see the timing of weaning as an incredibly useful tool in our armoury. It is a weapon that may only be wielded rarely, but when used wisely will not disappoint 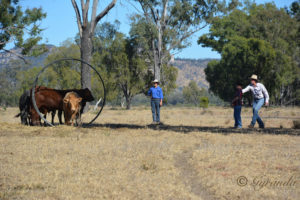 Joining time! With bulls in it is prudent to ask how we go about matching up bulls and cows here at Gyranda, and with what objective. After all, the results of this year’s joining could have an effect on your herd in 2017 and beyond.

Our objective is to breed well balanced cattle, predominately poll, with an expanding elite pushing the boundaries for growth, carcase and fertility.

In June we go through the sires to stocktake those on hand and focus on the type of bulls we want to keep or buy for the upcoming season. We check for soundness – especially of feet, sheath and semen morphology. Old bulls are taken out. We look again at the type of bulls; their head, coat, frame and muscling, paying special attention to how younger bulls have grown out.

In contrast to most seedstock producers our sires have to demonstrate the capacity to deliver calves in a multisire herd before we keep them on. They must be able to compete for cows. For this we rely on DNA sampling of tail hairs and their calf getting ability will be used along with updated EBV data to eliminate any non-performers.

In matching those lucky sires who make it through the annual cull to their cows (some multi sire herd, some single sire herds) we pursue what is essentially a two tier joining system:

Whist we are pushing to deliver a more consistent calf, the value of diversity is never underestimated. Single trait selection – e.g. chasing growth alone – is fraught with danger and joining is always undertaken with a view to producing  a well balanced animal.

Poll bulls are preferred and Homozygous poll sires especially so – but not at the expense of other traits. I think that the Santa breed had evolved a large proportion of exceptional poll cattle in recent decades and Texthave no doubt that homozygous poll cattle with a good balance of traits will evolve very quickly.

Last year, despite the dry summer, we tightened up our calving interval and improved our preg. testing rate across the board. We will continue to increase the number of cows to each bull in an effort to put more pressure on the stamina and breeding capacity of our sires.

In our stud operation we have the added bonus of knowing a great deal about  our females. As commercial operators you will rarely have this luxury and your primary tool of change is in the bulls you buy. Knowing the strength or weaknesses of your herd (e.g. mature cow size, finishing ability or fertility) allows you to select bulls to best push your own herd where it needs to go. 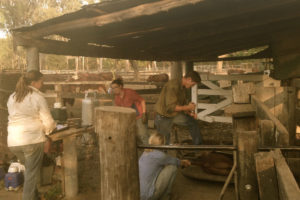 This year we are taking up a very good line of 20 bulls. Most of these are polled, including Lot 55 J326, which is a homozygous poll bull. They have been selected for strong muscling, good growth and slick coats.

We also have a large number of 2 y.o paddock bulls for private sale. These are well balanced bulls, structurally sound, semen tested with clean coats and a burning ambition to get you calves you can be proud of. With full EBV’s and starting at $2500 they offer tremendous value at this time when none of us can afford to throw money away. 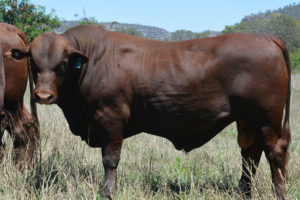 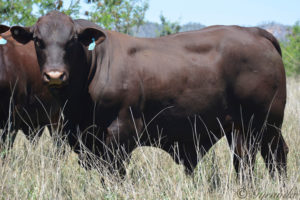 For those who are interested in seeing Gyranda from a different perspective the 4D farms site has just been updated with October photographs showing an interesting contrast in the seasons. Go to: https://4dfarms.vet.unimelb.edu.au/gyranda/tour/index.html 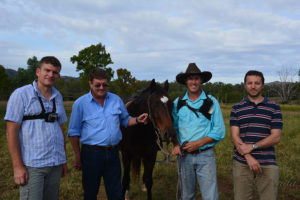