Hi to our good friends.

Cheryl had two junior bulls – we had three bulls, three heifers and a cow and calf. The Jordan River School had three of our heifers. Peter Collins from Victoria (who has Angus) judged.

Our cow was judged Grand Champion Santa Female then defeated Joshua for Supreme Santa Exhibit. Next day in the Senior Interbreed Female in a very strong class she was awarded Reserve behind a magnificent Charolais cow and calf.

Since then, Burnett and Louise have been in Tasmania and have sent a few updates

We heard that Deloraine Show was coming up, and that the Pilchers & Murfets were taking cattle, so yesterday we had an early start. What a day we had!

The cattle were judged in breeds, then interbreed competitions. The Pilchers had most of the Santas, with the Murfets having the other couple.

Joshua, the bull the Pilchers bought on its mother, is now an outstanding, neat sheathed 21/2 year old sire, who parades beautifully, and really looks the part. Not surprisingly he won grand champion Santa Bull, then went on to win the Interbreed, against stiff opposition, especially from the big Angus bull.

The dam of Joshua was pregnant, and has a good lighter coloured bull they plan to sell. It was most exciting to see a stunning lineup of Santas. 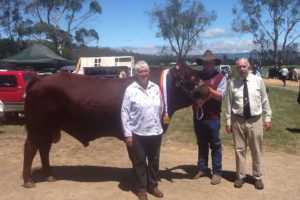 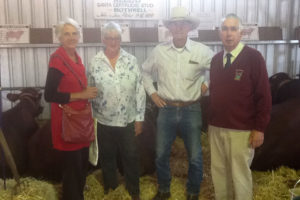