We have weaned the vast majority of our calves with most coming off at the end of January. These calves averaged 160kg and were weaned down to 70kg. At a cost of approx. $1.50 per head per day we will be feeding them for some time to target a weight gain of 0.6-0.7kg/h/day.

In previous years where average weights were closer to 230-250kg and we had plenty of good pasture we contented ourselves with providing feed bins for four to five weeks for their nutritional needs once out of the yards.

Obviously at such low weights this year the calves need to be looked after for a while and we have been feeding out a silage /grain mix that we developed with Ridley to try to target a 0.6 – 0.7kg gain per head per day.

The silage is part of 1100 tonnes of sorghum silage that we put down last year and it took the weaners some two to three weeks to come onto it properly. Even now there are about 10% shy feeders.

Trough quality and space has been an important learning curve for us. Originally we put the feed out on poly belting but found that the weaners were walking through it, sleeping on it etc. and there was a lot of waste. Since moving up all of our steel feeders (as in photos) we have found waste is minimal but we probably still do not have enough trough space – something we are working to combat.

Early results are positive with weight gains in the 0.4kg/h/day range and I am hoping that now they are fully into the feed we can get close to our target.

It costs us about $1.10 for grain and 12c for silage per head/day plus labour and machinery so if you were to work on $1.50/h/day I think it a reasonable estimate. Of course spending this sort of money up front is never an easy decision but with weaner prices in the $3.00/kg range it should be financially viable –even if we do have to sell off some of these weaners at a later date. 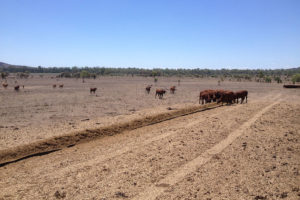 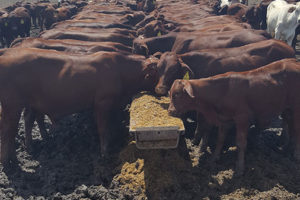 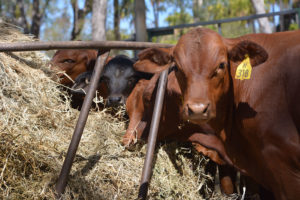 Two weeks ago we received 50mm of rain  – our largest fall since March 2014. Slated locally to be the driest summer since the 1950s, with two exceptionally dry summers under our belt, three months of heatwave conditions and minimal feed ahead of us we have had to sell off all bar the core of the herd. This core includes the top of the young stud cows and young cattle – weaners and yearlings – that will be the breeders and sale bulls of next year. This will come to a climax in the next few weeks as we cut into the stud cows. For those looking to upgrade their female herd it could provide a great buying opportunity.

Having completely dispersed the commercial herd, after preg-testing this week we will be offering two to three decks of young stud cows on Auctions Plus (Friday March 24 – SIM 420 Eastern States ). These cows will be preg-tested empty (or too early to detect).  For most it will be their first miss and some would say that they have a reasonable excuse. For anybody who Autumn joins or joins early in the spring these cows represent a great chance to secure quality breeders that will undoubtedly give many years of service.

We will be also offering a line of older pregnant stud cows for sale. These will be 10 years old plus and I imagine we will have two to three decks of these cows. As a rule these cows have not missed a beat – delivering outstanding calves each year.  These will be sold privately at reasonable prices so if you are interested please contact me as early as possible. (07-49937144 / peter@gyranda.com.au )

Like everybody, we are hoping that late rain …. perhaps even this week ……means that we don’t have to sell too many of our young, pregnant stud cows, but that is unfortunately the next step.

Pictured below is part of the commercial herd before and after happily moving onto greener pastures near Boonah, Qld. 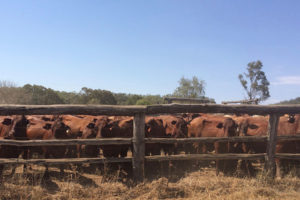 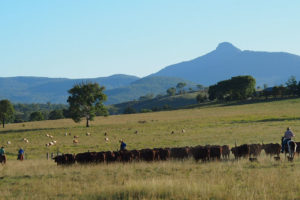 At the end of last year Nikki and I travelled back to Europe to visit friends and relatives to line up with our daughter’s French Immersion trip. Whilst there we spent three days at Purpan University in Toulouse in the south of France. Purpan is one of Europe’s major agricultural universities and each year, one of their students undertakes a three month internship at Gyranda.  Our role while there was to give second year students lectures on Australian Agriculture (in a mix of French and English) and to discuss (in English thankfully) with the masters students some of the issues and opportunities facing world agriculture. Two things really stood out for me. 1. The optimism, vibrancy and number of the young agricultural students and 2. Just how far ahead of the rest of the world our meat standards (MSA) system is in Australia. Our quality assurance system is certainly the envy of the world and maybe – just once in a while – we should give ourselves a pat on the back for a job well done. 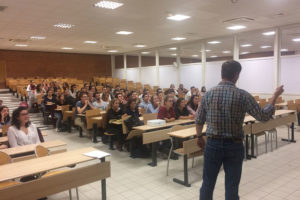 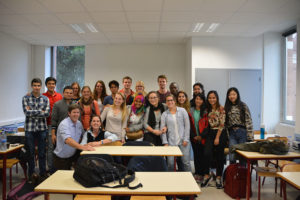